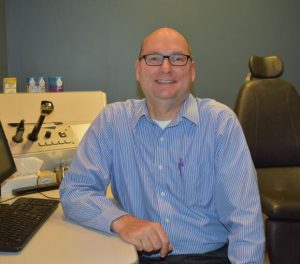 Dr Greg Sepanski is a native of Wisconsin.  He attended University of Wisconsin – Parkside where he received an undergraduate degree in Biology and a minor in Chemistry in 1986.  He graduated from University of Wisconsin School of Medicine in 1990.  After graduating from medical school, he served and trained in the US Army under the Health Professions Scholarship Program.  His Transitional Internship was done at Letterman Army Medical Center in San Francisco, CA.  He spent two years as a staff Emergency Room Physician before proceeding to his residency in Ophthalmology.  His Ophthalmology residency was done at Brooke Army Medical Center in San Antonio, TX from 1993-1996.  Dr Sepanski spent his last two years in the Army as a staff ophthalmologist at Martin Army Community Hospital at Fort Benning, GA.  Upon leaving the Army, he went to private practice in Montgomery, AL before turning his sights on Auburn, AL, where he has practiced general ophthalmology since 2000.  He is a board-certified general ophthalmologist by the American Board of Ophthalmology and a Fellow of the American Academy of Ophthalmology.  Dr Sepanski and his wife, Jane, reside in Auburn.  They have two daughters.